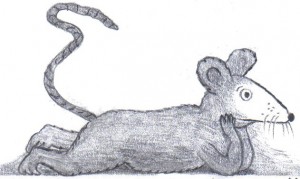 Part 1 – A Rat’s History of Psychology

Your teachers may seem superficially knowledgeable about psychology, but if you’d rather hear from someone who has experienced the subject from the inside, then ask a rat.

Like me, for instance. I can tell you, I’ve run mazes with the best of them. Pressed levers too. You wouldn’t believe what they’ve put me through.

Fortunately, my hypothalamus is still intact. I was lucky enough to be left out of the brain surgery group. Otherwise, I’d be in no shape to be the mascot of this blog.

Psychology is a relatively young science. Luckily for us rats. It was only in the nineteenth century that people began to study human behaviour using the kind of scientific approach that modern psychologists like to imagine they bring to their work.* Of course, there had been philosophers long before that time who had ruminated on the nature of consciousness. But the people who began to study human thought and behaviour scientifically, employing a systematic method that could be replicated by others and written up in dusty journals, emerged only in the nineteenth century.

This history is not about Wilhelm Wundt, that first truly scientific psychologist. Even William James has barely entered my stream of consciousness. I’d prefer to repress Sigmund Freud altogether. Let Hermann Ebbinghaus fade from your memory as he has from mine. This is a rat’s history. The mistreated rats of psychology take centre stage in my story.

You may be shocked to learn of the cruel exploitation of rats in the history of psychology. If you’re sensitive, don’t read on.

For example, we rats were part of a study in 1943 that showed how vital the hypothalamus is to the experience of hunger. Rats with a lesion (in this case an injury caused by surgery) in one part of this tiny structure in the brain showed little or no interest in eating. They had to be fed intravenously; otherwise, they would have died. When a different part of the hypothalamus was cut or lesioned, the affected rats couldn’t stop eating. They no longer knew when they’d had enough. The first kind of rat became emaciated, the second obese (Brobeck, Tepperman and Long, 1943).

I feel great compassion for my rat comrades who were unwilling participants in that experiment. Is that kind of suffering ever justified?

That study revealed all sorts of information about the role of our hypothalamus. The human hypothalamus is similarly important. It’s about the size of a kidney bean but it is vital to the regulation of basic biological needs, just as it is for rats. One of the key functions of the hypothalamus is to control the autonomic nervous system. It is consequently vital in regulating the so-called four Fs: fighting, fleeing, feeding and mating.

So, you see, that experiment provided insight into many topics that you will encounter in your years of psychology study:

I need hardly say that as a rat I feel torn. On the one hand, we have contributed to the development of human knowledge. On the other hand, we have suffered for it.

*Wilhelm Wundt established the first formal laboratory for research in psychology at the University of Leipzig in 1879 and the first scientific journal in 1881. He viewed psychology as the scientific study of conscious experience and he founded a new science that drew from both philosophy and physiology but modelled itself, at least in theory, on the scientific method of fields such as physics and chemistry.

Next Instalment: Little Albert and the White Rat